Popular posts from this blog

Reading Notes: The Five Tall Sons of Pandu (Part A) 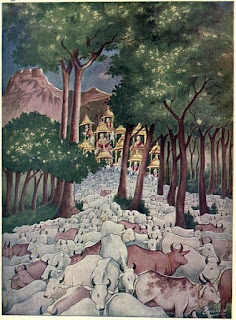 Source:  The Indian Story Book: The Five Tall Sons of Pandu By Richard Wilson The story begins with Pandu and his five sons: Yudhishthira, Bhima, Arjuna, Nakula (twin with) and Sahadeva. Pandu then dies, and his blind brother Dhritarashtra becomes king with 100 sons (eldest Duryodhana)     His sons are trained by Drona Drona sets up duels for the cousins, Bhima and Duryodhana fight too fiercely and were forced to stop     Arjuna shows his skills in archery     Arjuna challenged by Karna, who is unable to proclaim lineage and becomes king of Huga     Duryodhana defends Karna's skills despite humble background Yudhishthira is to become king, Duryodhana is furious and tries to burn the brothers with their mother (Pritha), but they escape Karna tries to win the archery contest for princess Draupadi's hand, but is refused even after stringing the bow Arjuna, as a hermit, then strings the bow and hits the target Arjuna calls Draupadi a prize Pandavas have an aliance with king Drupad
Read more

Week 9 Story: The Princess in disguise

Source: Tiny Tales from the Mahabharata By Laura Gibbs In a kingdom somewhere, there was a princess. She was the only child of the king and next in line to the throne. Many suitors came from lands far away longing for her hand, and the power that came with it. Man after man, she only saw deceit, greed, and entitlement. She knew she would have to find a husband elsewhere. The princess went to her sorceress, and asked her to turn her into and old, unbecoming woman covered in wrinkles and warts. The sorceress says "what a strange request, in what way could this help you?" The princess answers "I just want to try something different, no reason!" Of course the princess hid the real reason she was changing her appearance. She did not want the sorceress to tell her father because he would stop her. That night the princess left the castle to the outskirts. She would go door to door, knocking and asking for a place to stay. The princess decided she would take the hand of th
Read more